Productive teams and how to get your hiring really working

Have you experienced hiring someone who looked fantastic, said all the right things, had the perfect resume and experience – but later turned out unproductive and even destructive?

On the other hand –

Have you experienced hiring someone who didn’t present well, didn’t even have a good resume. You asked them if they like to work hard – and they said no. But you were desperate so you hired them. Few weeks go by and they turn out to be your best staff ever!!

This tells us that how someone looks and sounds or how professional their resume is really has nothing to do with how they will actually perform – and you need a better way to discover “who” is really behind that interview mask before you hire them.

Performia helps you get your hiring strategy worked out so you can focus on growing your business with the right team members. REGISTER YOUR INTEREST 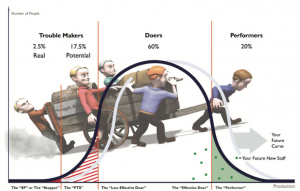 Focus on individual productivity
No employee feels truly good if he or she is not contributing to the group’s survival and prosperity.

Here there is much to learn but at the same time, there are very simple steps that can generate major improvements. When one of your employees begins to produce better, both the individual and the team moves immediately in the right direction.

Knowledge of how to recruit the right person
Recruitment is a key area in the creation of a high performing team and that means that even the most senior managers of any company need to have a thorough understanding of how this actually should and could be done in reality.

We often think of “recruitment” as only “the hiring of new employees”. And yes, this area is incredibly important, and if you really understand this area as thoroughly as we recommend, you can as well more effectively help “recruit” the right suppliers, the right customers, the right distributors, the right partners, the right board members, etc.

The level of your business survival rises or falls on the ability to accurately assess different people.

Most companies are losing enormous amounts of money and as well a huge amount of time due to key personnel in management, which often are very knowledgeable in many different areas, have not yet received sufficient knowledge to be able to recruit the right person everywhere.

Real potential companies can thus remain only “potential”, or just partly reach its potential, or at worst be closed down instead of having a great success as a team.

Look at where Steve Jobs took Apply to from the brink of bankruptcy in 1997. What most people don’t know is how involved Mr. Jobs was in the recruitment process.

He personally interviewed over 5000 job applicants for Apple as he did understand the importance of this area.

The difference in the end result can thus be huge while the actual work (in number of hours) by management often gets less when you succeed in the art of creating a team.

We have many of our customers who have thanked us for now being able to take a normal vacation without having to worry that the company will nor function or be managed while they are gone.

Development of existing staff
Existing staff who are already doing well plus many of those who are not functioning optimally can often (if the willingness is there) quite easily be remedied or improved further.

However, it is incredibly important how you proceed when you commence that process. If you do it wrong it can turn into a strenuous, inefficient and expensive activity and if you do it right it quickly can become a profitable, a real competitive advantage and something that contributes to the team becoming more a team and thus also more productive.

Job satisfaction and profitability
Productive teams are not only considerably more viable, but also normally a lot more pleasant to work as part of (providing that you yourself are reasonably productive).

This is often a not unimportant part of the “payment” for those executives who are looking at and wanting to become an expert also in the area of team building.

We look forward to partnering with you in building a productive, safe and easy to work with team. Let us know what dates and location that suit you the most!